Time for another one of my crazy experiments! This time it’s a technique I’d never even heard of until someone showed me a 10 second video on Snapchat, of all places! An unnamed pourer used a funnel instead of a flip cup, basically. They loaded all of their colors into the wide part of the funnel with the tip secured to the canvas, as soon as I saw this I thought “hey! I have a funnel!” So why not give it a shot?

Now, the video I watched didn’t produce the most amazing pour, it was a bit one note. But that could have been due to any number of factors from inexperience to color choices. Since this was an experiment with a more or less unimpressive tutorial I wanted to be cautious and calculated in my color selections. I went with a warm scheme that even if it did turn to mud it still wouldn’t be a total loss. But, as I am something of a disaster artist, as I was mixing my paints something strange happened. Somehow the glue and paint and water and alcohol created a blob out of my paint! I added a bit more water to break it up and was left with a blob of something-or-other at the end of my stirring stick. So strange!

But after resolving that issue I was ready to pour! I secured my funnel to the canvas as best I could, it’s a bit old but it had the two ends and shape I needed. I started by pouring in my yellow and then pink and then red and alternated until my funnel was full up and my cups were empty. A little yellow had started to seep out of the bottom but it was nothing disastrous. 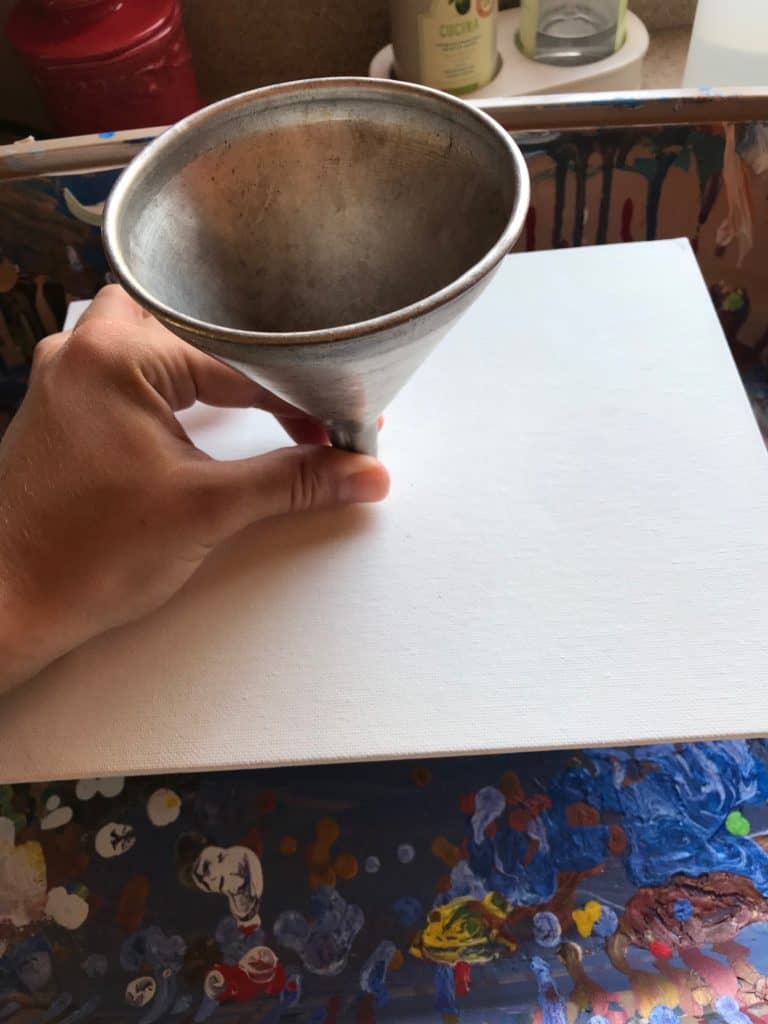 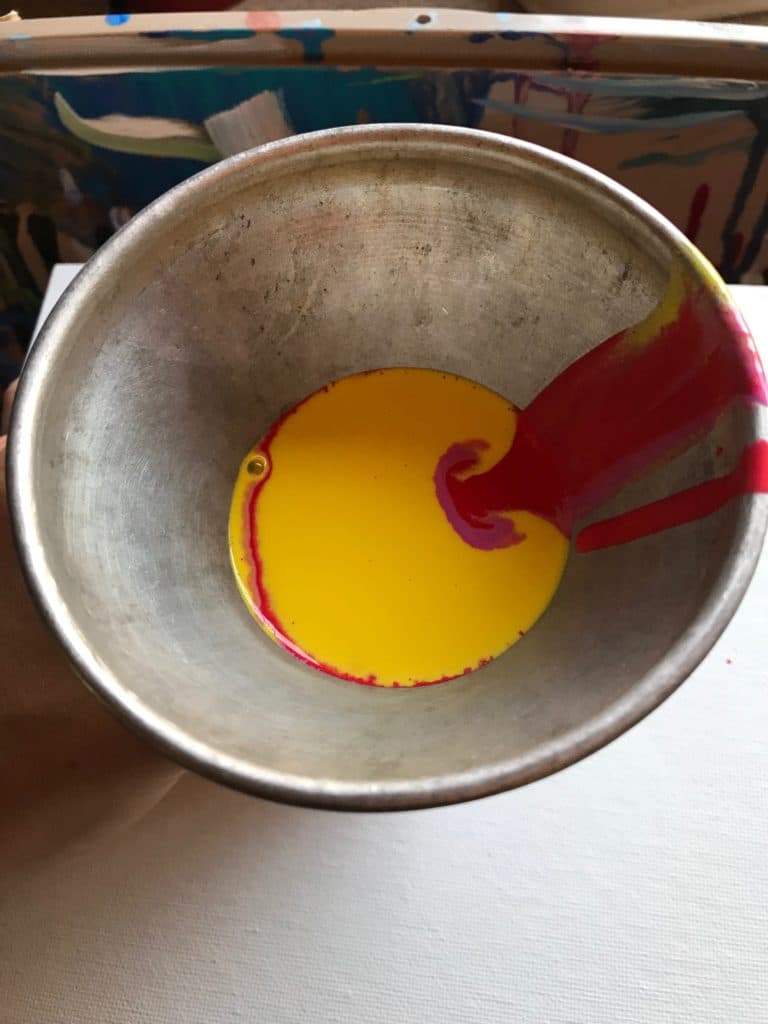 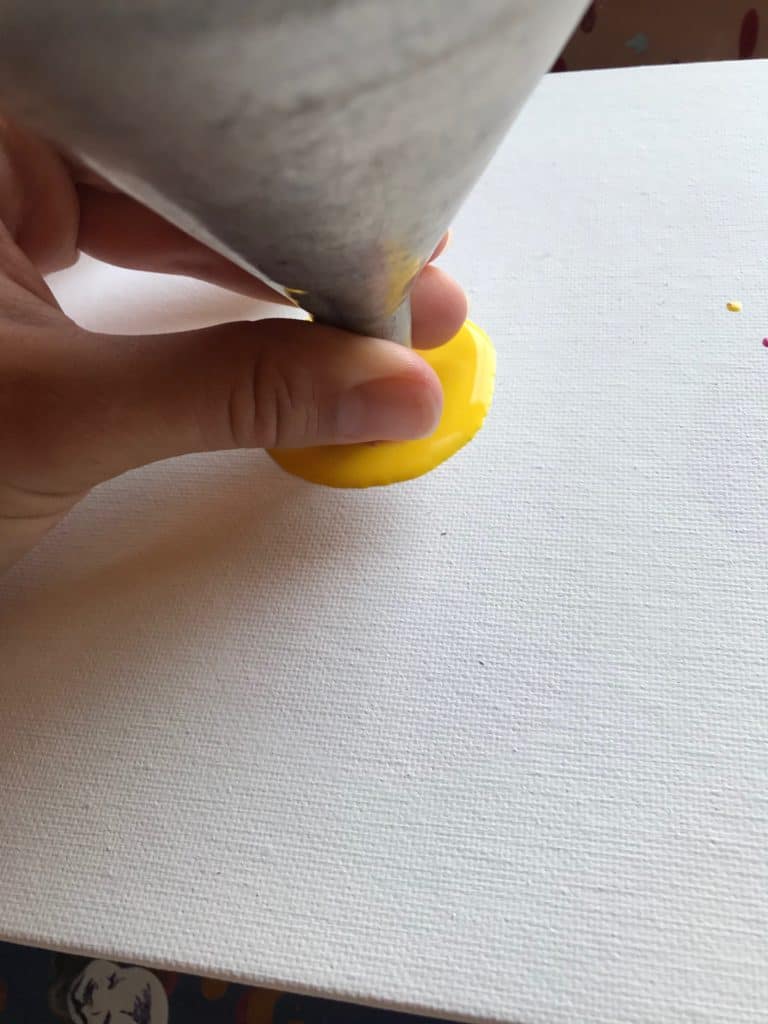 I was starting to get that little flutter of anticipation as I lifted up the funnel— oh my goodness you guys, it was so cool! When only the pink and red were coming out I got some beautiful tree rings and then the yellow cells exploded onto the canvas. It was seriously like a paint explosion! 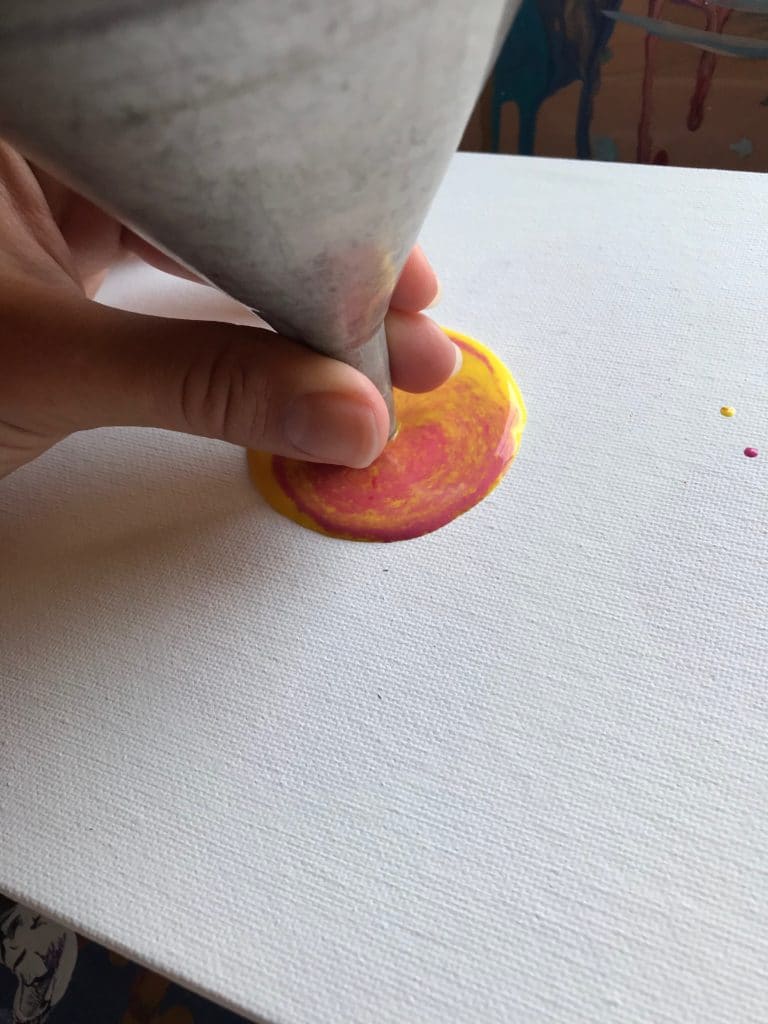 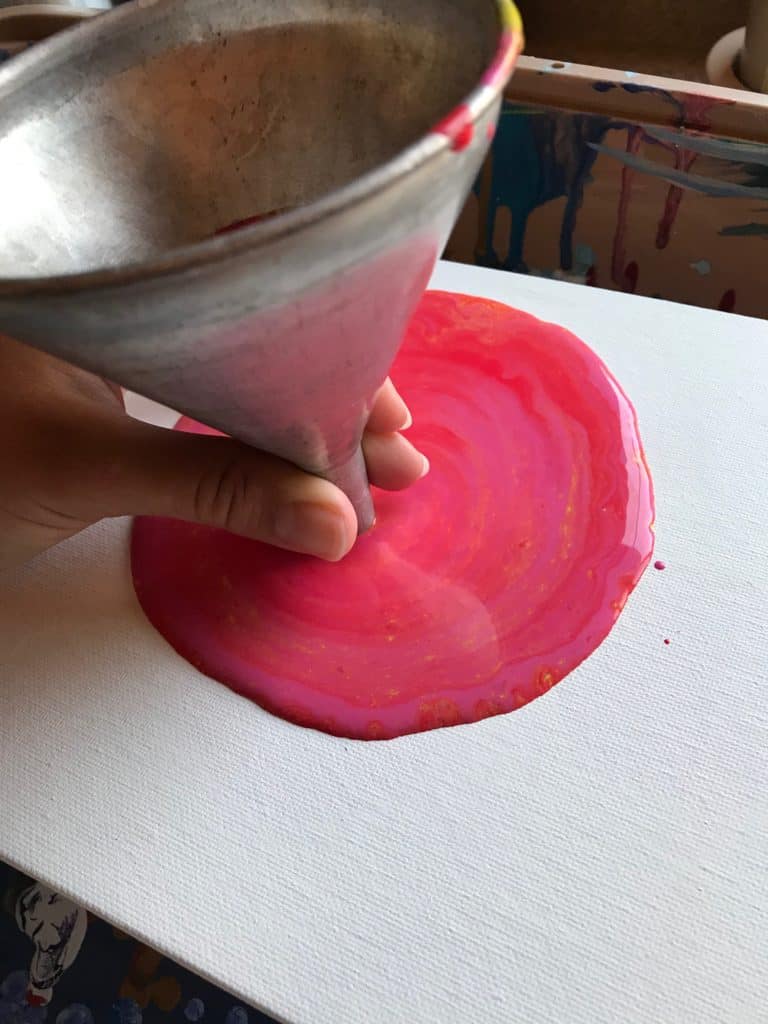 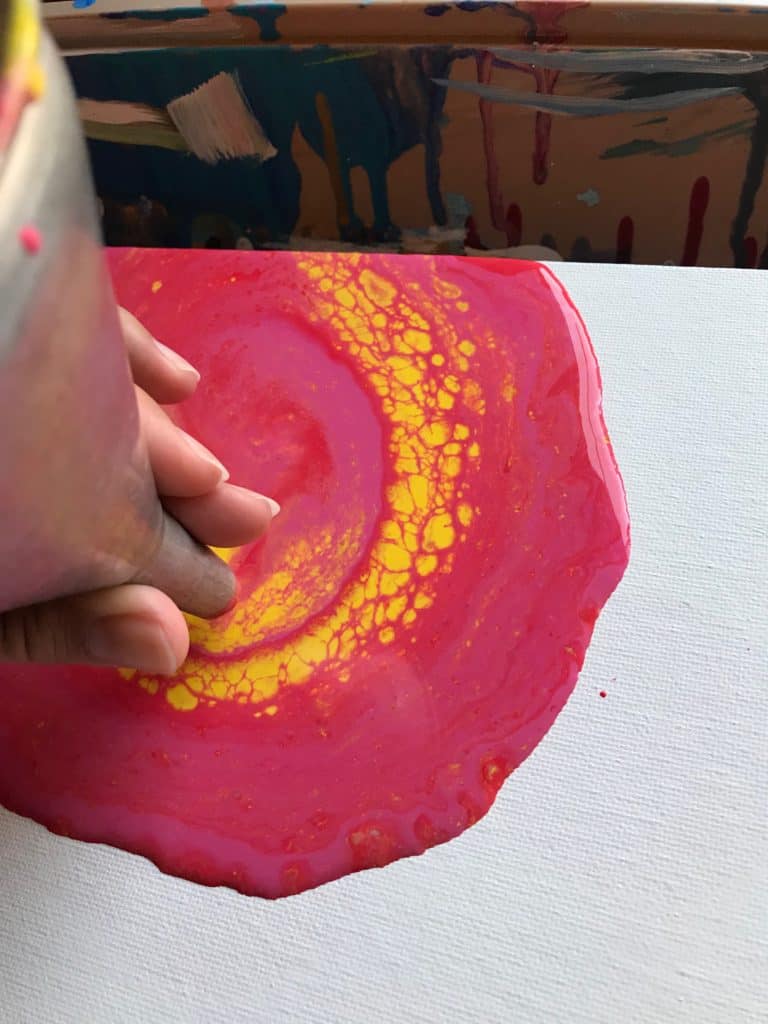 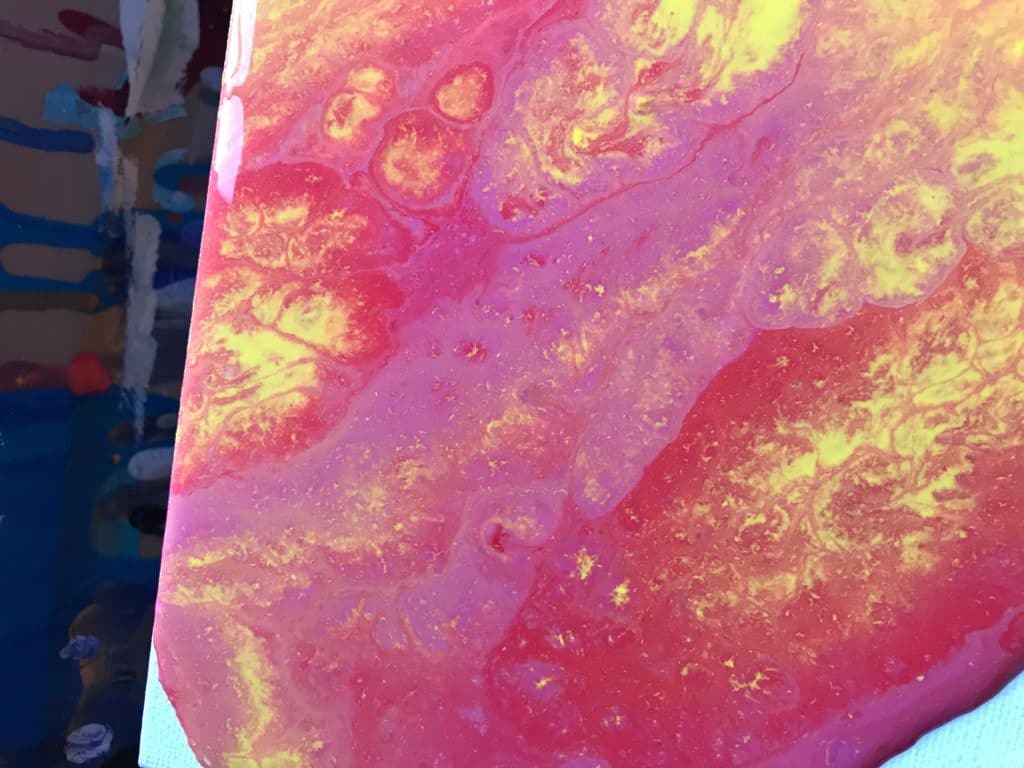 I gave it a tilt or two to spread out those cells and I was seriously loving my new pour—but as I was putting my funnel in the sink to rinse it out I tapped my basin and my canvas slipped off my cups. So it did end up turning to mud, which was a bit of a bummer, but like I said before, my colors were chosen to anticipate mud. Even though it isn’t as nice as what I had before, boy is that some nice mud! 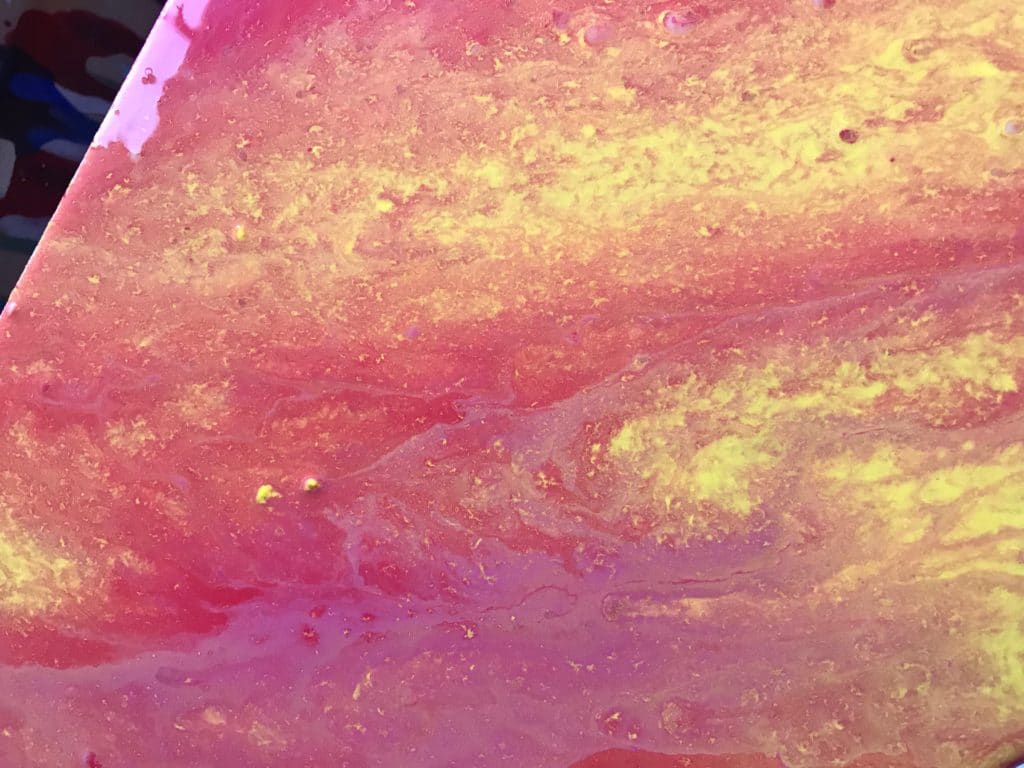 There will definitely be a round two for this technique!

3 thoughts on “Using a Funnel for an Acrylic Pour”