I was so happy the morning that I made this video. A week earlier I had watched a YouTube video by Crafty Jenn where she made a beautiful wave using her pouring/swiping skills and I was inspired!

During that week I watched her video a few more times and I was ready. I unwrapped a new canvas. I gathered up my paints. I tried to match the colors she used as closely as possible. I mixed up my paints, trying my best to match her floetrol/water/silicone ratios and to recreate the thickness of her paint.

I apologize for not being able to give the exact ratios I used of paint to water when I mixed up my paints. I can tell you no floetrol was used. The Lavender was a medium thickness. The blues, Aqua, and black were also of medium thickness and the yellow was the thinnest of all the paints. Here are my recipes for this latest pour:

Let’s just say things don’t always turn out the way you plan. A few weeks ago I posted a blog called “Flip Cup Fail” and after my first attempt at pouring a wave I had to take my own advice. Learn from your mistakes and try again. I bravely tried again—only to be met with failure a second time.

My wave didn’t look anything like Crafty Jenn’s Wave. Mine wave was awful! Fortunately, all was not lost. On both my failed wave paintings I was able to do a swipe or two and end up with a nice pour painting. But I still wanted a wave like Jenn’s!

Instead of forcing another painting and getting frustrated, I called it a day and put away my paints. Sometimes it’s better to take a break than to push on. A few days later I returned to my studio with a fresh attitude and on the first try I created a beautiful wave! I’m honestly not sure what changed. 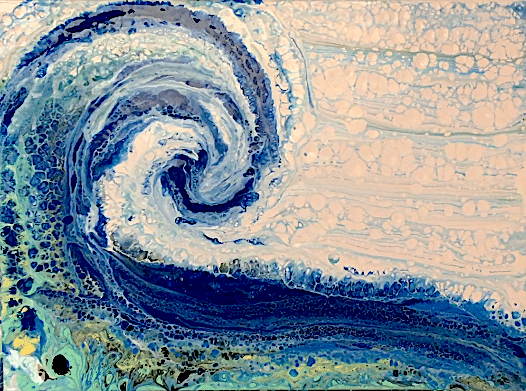 Perhaps I just needed some time to process what I did in the first two attempts. Or it could be that I slowed down and took my time more in the third wave. Whatever the difference was I’m thankful. You can hear it in my voice when you watch the video—I was thrilled.

This video shows me making another wave using the same techniques and steps as the first. When I paint, I tend to live in the moment and work intuitively. I love working this way. It’s a great way to get lost in your work and really enjoy what you’re doing. There is a trade off though—when I work this way I will look back at a painting when I’m finished and have no real memory of the steps I went through to create it. This video was my way to create a recipe of sorts so I can pour similar waves in the future.

In the video I mention wanting to create a larger wave painting and as a follow up, I was able to do that a few days ago. Keep an eye out for a tsunami painting created along with the the help of two neighborhood kids.

I hope you enjoy the video and thanks again to Crafty Jenn for inspiring me to give ‘The Wave’ a try (and another try and another try).

Steve Shaw is an artist and teacher living in Atlanta, Georgia. His days are spent in the classroom teaching his students the basics of art and self-expression. In the evenings and weekends, he paints. Steve has shown his work in several galleries in the Southeast and has illustrated three children’s books. Recently Steve has discovered acrylic pour painting and is putting all his other projects on hold while he journeys down this artistic road.

4 thoughts on “Riding the Acrylic Wave”