When I first started experimenting with acrylic pouring, I’m not sure I even knew what epoxy was. I’m not proud to say this, given that I grew up with a carpenter father and married a carpenter husband, but my artistic experience before acrylic pouring (a time I’ve dubbed B.A.P) never called for things like epoxy or resin.

Even after I began to pour, I made a slow transition into epoxy, probably in the same way you’re thinking. I started with a cheap, clear spray, then moved on to Polycrilic until, finally, I came across Super Glaze in my local Home Depot.

Rust-Oleum Parks Super Glaze Epoxy Resin (whew, that’s a mouthful) is a relatively inexpensive epoxy resin that is easy to use, has a pretty long setup time, and if used properly, cures crystal clear. Sounds too good to be true, right? 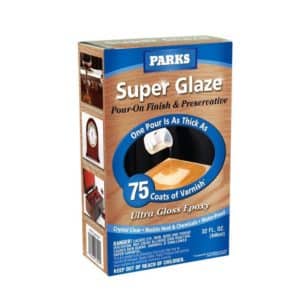 At least in my area, it is very difficult to find a store that carries epoxy resin; as a matter of fact, this was the first time I’d ever seen any on a store shelf which greatly contributed to my willingness to buy it! I wasn’t quite ready to take the leap and order a gallon of art-specific resin for $100+, so the option to buy a quart and experiment before investing in ArtResin was very valuable to me.

Super Glaze is an epoxy resin, which means that it has two parts that are mixed together before being applied to the desired piece. These two parts are an activator and the resin. In the case of Super Glaze, these parts are combined at a 1:1 ratio.

I want to be clear, it is very important that the activator and resin are mixed at an exact 1:1 ratio! If the parts are unequal, the product will not cure properly and you may lose your piece altogether; not a risk worth taking! I strongly suggest investing in clear, disposable plastic cups so that you can see both liquids and measure them equally.

Once you’ve measured your parts equally, you will combine them by pouring Part A (the resin) into Part B (the activator). The instructions then state that you should stir this for three minutes. Now, when you’re stirring resin and feeling the need to pour it on your painting, it can be tempting to skip or shorten that endless three minute stir, but don’t. It takes patient and methodical stirring to make sure that the activator and resin are fully incorporated.

After your three minutes are up, you’ll transfer your mixture to a clean container and mix again for three more minutes. Again, this is of the utmost importance. Rust-Oleum’s directions state that if you have bubbles from your first mixing, most if not all of them will be eliminated with the second mix in the clean container. As we all know, bubbles are not an artist’s friend when it comes to resin, so take the time and mix it right!

When your stirring is complete, it’s time to apply the resin! Everyone has their own tried and true ways of applying resin; I applied it as I apply my Polycrilic, and poured it in a puddle in the middle of the painting. Then, I tilted and manipulated the canvas so that the resin evenly covered the surface and sides.

This is a tedious process, and where proper measurements come in very handy; having too little resin will prove to be a frustrating problem. ArtResin has a great resin calculator where you can plug in the dimensions of your piece, and voila! Instant measurements so you don’t waste a drop.

Like most resins, Super Glaze is self-leveling; even though I might not have manipulated the fluid in a completely even way, I was careful to keep the painting completely flat during the curing process. The result was a glass-like surface without imperfections that had a smooth, even finish.

For my usage, I didn’t have an issue with bubbles; if you do, you can always use a torch to pop them so you have an even finish. However, there were no bubbles present in my Super Glaze, and I credit that to following the stirring directions carefully. When you’ve combine the resin and the activator, smoothly and slowly stir so that you don’t introduce air to the mixture, and you won’t have to worry about air bubbles in the finished product. Keep in mind that if you must use a torch, be absolutely sure not to over heat the resin or you may have trouble with indents and pock marks.

When initially researching resins, one of the most important features I looked for was UV protection. For example, ArtResin promises that their product won’t yellow over time. After all, no one wants to spend the time and effort sealing a beautiful painting only to watch it slowly degrade in the light.

Unfortunately, I couldn’t find the same promise with Rust-Oleum Parks Super Glaze Epoxy Resin. There aren’t any readily available details about whether Super Glaze is UV resistant. I’ve only done limited tests with good results so far, but before using Super Glaze, I would recommend checking with Rust-Oleum.

Overall, I loved this product! I’ve received many compliments on the glass-like appearance of the paintings and coasters I’ve used it on. My only hesitation is with the lack of information regarding the product’s lightfastness; if you would like to be absolutely sure that your paintings, coasters, or other work will resist yellowing, I would strongly recommend reaching out to Rust-Oleum to confirm whether the product will stand the test of time.

Sara Wagner is an author and artist from Upstate New York. She is the owner of Studio Blackwater and can typically be found covered in paint, cats, or her two young daughters. You can find her on Facebook and Instagram as @studioblackwater.

7 thoughts on “My First Resin Pour with Hardware Store Epoxy”